Why Babiš should be prime minister

James de Candole
31. 10. 2013 | 10:04
Přečteno 3084 krát
Tweet
Sdílet
And why his disputed StB record is his trump card, preventing him but not his people from entering the government - an ideal outcome for him. 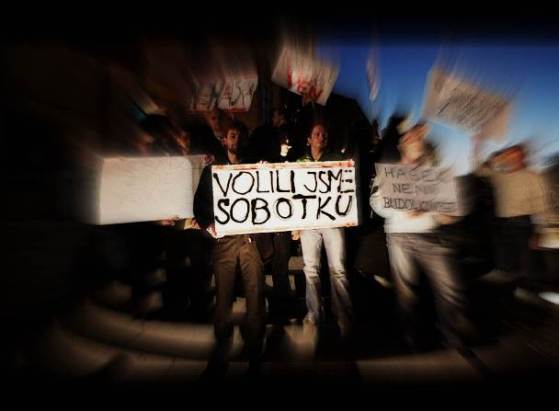 This is not absurd: It is democratic politics.

Now that Michal Hasek and his putschists have been safely dealt with, Andrej Babis has boldly rallied behind Bohuslav Sobotka. Babis insists that ANO will go into government with CSSD and KDU-CSL on the condition that Sobotka be prime minister. Apparently, Babis does not have the stomach "to work with a liar" (in which case, you will say, he will soon be out of work in politics.)

But there is at least one serious reason why Babis wants Sobotka - and not himself - to be prime minister, and why Sobotka and KDU-CSL's chairman, Pavel Belobradek, should insist on him taking the top job in a coalition government in which they too would participate.

The reason is the nature of power itself.

Erik Best hit the nail on the head in his Final Word column when he argued that, from “the standpoint of public control, it is much better that Babis become the Czech prime minister than chairman of the budget committee”. Exactly.

My principal objection to Andrej Babis the politician is not his dubious past or his threat to run the country as efficiently as he runs Agrofert. It is the great potential he enjoys to avoid responsibility.

First, there is his character. By all accounts, Babis is not an especially vain man. His desire for power seems stronger than his love of praise. In this, he is quite unlike Vaclav Klaus for example, who evidently gets more excited by the praise that power brings with it than the power itself. Babis appears more like Livia Klaus, who obviously relishes in power for its own sake (it is said that she has enough ambition for both herself and her husband.) In short, Babis does not appear to need to surround himself with sychophants (sic) and the trappings of high office. He is content to wield power discretely, from behind, like Mrs. Klaus.

Second, there is his business. We must assume that Babis’s business matters more to him than anything else apart from his family. Most self-made men are defined by the companies they have built from nothing. The conflicts of interest that would engulf the absolute owner of Agrofert if he were to become a government minister (unless he was to become the minister of culture) can be avoided, or at least more easily managed (or disguised) if he were to remain on the backbenches.

Third, there is his political movement. ANO 2011 is not a political machine, at least not yet. To turn this collection of ambitious individuals into a broad-based political party will be a most laborious labour of love over many years. If the most talented of the bunch go into government today, that slow work of party building will not get done. And although ANO 2011 cannot now avoid going into government, its owner can. In short, if Babis can leave his business in the hands of his people while he runs the country, then he can just as well leave the country in the hands of his people while he runs his business.

Fourth, there are his coalition partners. If CSSD and KDU-CSL were stronger than they are today, there would be a greater incentive for Babis to become prime minister. But CSSD is busy trying to decide if it wants to be a political party or an appendage of Milos Zeman. And the re-born KDU-CSL is still in its infancy. My point is that instability in CSSD and inexperience in KDU-CSL makes it easier for Babis to avoid becoming a government minister himself.

Babis has called the internal struggle within CSSD ‘an absurd situation’. How so? From the perspective of an absolute owner of a ruthlessly efficient company, I can see that the squabbling of politicians is an ‘absurd’ waste of time. But that is the very stuff of politics, most of which is a waste of time. That is democracy in all its maddening inefficiency.

The absurdity in all this is Babis himself. It is absurd that a self-made Slovak billionaire with a disputed record of collaboration with the StB and a handful of former politicians, some of whom are no doubt well-meaning and others of whom are clearly opportunists, should now be expected to save the Czech democratic system from itself.

Over the last few days, I have made the comparison between Andrej Babis and the Georgian billionaire, Bidzina Ivanishvili. A week ago, after a year as prime minister, Ivanishvili announced that he will replace himself with a new prime minister, and step into the background. “I won’t be a politician any more”, he declares. But Georgian Dream, the party he funds and leads, will still run the government.

A retreat from high political office is not a retreat from power. The world is full of de facto rulers that hold no formal position in the running of their country.

Is the Czech Republic to have such a ruler and to become such a country?

ANO’s future coalition partners should insist that ANO’s owner (and chairman) becomes prime minister. They should refuse to let him orchestrate things from a seat in parliament, or even from a kitchen cabinet in his fancy restaurant on the Cote d’Azur.

In short, Pavel Belobradek and Bohuslav Sobotka must deny Andrej Babis the greatest political luxury of them all, the luxury of power without responsibility. One Milos Zeman is already one too many.

And now we see just how very useful his disputed StB record is for Andrej Babis. It will become his trump card, preventing him, but not his people, from entering the cabinet, whether as prime minister, finance minister or even as minister of culture.

If anything, then Andrej should really be the culture minister.
That's a suitable role for a dictator.
Try to imagine the alternatives, Stropnický and Jandák and shivers will run down your spine.
31. 10. 2013 | 14:18

The ministry of culture is, by the way, the only place where this (or any other) government can do something good.
Everywhere else the people, who really run their businesses do know how and will be lucky, once the state (and the EU) gets out of their way.
31. 10. 2013 | 14:19

You do not need any politician to build a highway. You need geolologists, geometers, drivers of building machines and an adamant state institution, which controls quality.
Honest lawyers, who are a rare species.
And some earnest scientists, who do the math to decide if and where a highway is needed.
31. 10. 2013 | 14:20

Then the fight for "priorities", which is the raison d'etre of the political class and which consumes most of the resources collected with the pretense of solving the problems, which are created to go continually up and down the sinusoide of importance; then this fight would be rendered useless and the resources would be set free.
Imagine, no debts.
Lloyd Blankfein would tear out his last three hairs in despair.
31. 10. 2013 | 14:22

There are mere 16% of voting right holding people, who wish, that Bělobrádek and Sobotka should decide what Babiš'š role, or whatever other kind of nonsense that comes up in this childish game, will become.
31. 10. 2013 | 14:27

Yes, good point. But Babis can be simply seeking some other long term objectives. If I were him I would also stay in opposition and let the hungry, low-income social democrat politicians get the positions they need to increase their annual earnings. I would let them get corrupt as possible and when the situation is convenient I would make their crimes public and call for new election to increase the market share (they are not very intelligent anyway, otherwise they wouldn't be so poor and hungry). Meanwhile I would consolidate the situation inside ANO party and at the end I would be able to act much more efficiently (than if involved in the upcoming government). Is that bad? Not for me... it's not immoral and it's rational...
31. 10. 2013 | 14:30

The question is still here- is it really the necessity that the owner (the leader of political party) must be also a prime minister or at least the government member? It gives Babis more space to maneouvre if he stays aside. Should his nominee/s fail he can replace them easily and remain Mister Clean.
31. 10. 2013 | 16:58

Aristotle observed in his works the political system in shifts from one form of government to another – from democracy to more hierarchic ones where arguably the rich and the powerful have the interests of the country as a whole at heart.
01. 11. 2013 | 11:41

Fukuyama came to a conclusion that it is no way a foregone conclusion that the so called “Middle class” (Petite bourgeoisie) will defend the democratic system at all costs, come hell or high water. When, he claims, faced with the importance of some form re-distribution of a part of their income (or property) in order to create a more balanced and stable society, he argues, empirically, they will more often than not opt for a form of more authoritarian government which they feel will defend their property from the poor sighing for it (of course they believe it was righteously earned and is well-deserved).
Recently I watched a great British documentary about the Spanish civil war – about its origins and causes. They interviewed a democratic politician of the Second republic (the one before the Franco dictatorship) who put it bluntly and succinctly …. “in my view it is impossible do an agrarian reform without a revolution”. After centuries of oppressive feudal system there were enormous divisions in society in terms of distribution of land property – there were minor few who held vast land-holding whilst the overwhelming majority of the landless lived at a subsistence level, amounting in fact to an indentured servitude, working the lands of the land aristocracy for remuneration amounting next to nothing.
Even today's Spanish society, with a slight stretch, can be defined a long-term truce between factions of society with very different (often antagonistic) interests.
Should the authoritarian form of Government come you needn't worry too much – I have got friend who lived in Spain under generalissimo Franco and as they put it …”unless you felt obliged or an internal urge to shout on the streets anti-government slogans you were fine.” The worst that could happen to you would a restriction on your blogging activity, of which I have a sneaking suspicion, you would find more palatable than having your possession seized and forfeited by an all-out Bolshevik revolution. Right ?
01. 11. 2013 | 11:54

addendum to the section about the Spanish civil war : The contradictions and animosities within the society were so high so the democratic system was not able to cope with them. The expectations set extremely high by different strata of the society were bound to be dashed. When in 1931 the 2.republic came people spontaneously rushed into the streets held hands, chanted song and jointly expressed their state of elation....a couple of years on...the same people were shooting and slaughtering each other.
The last segment was said "a tongue in cheek".
01. 11. 2013 | 12:18
stránka: 1/1